Thank you for taking the time to visit and observe my portfolio. I am a freshman at the University of Southern California, studying Broadcast and Digital Journalism. I have worked for several media outlets in my career, ranging from Fox Sports Radio to the Los Angeles Times. In this portfolio you will find several print and broadcast stories of mine over the years. I also provide links to my social media handles, e-mail, and résumé below.

In this Sports SCene segment, Josh Cohen and I break down the USC Women's Lacrosse team's 13-0 start to the regular season. We highlight the team's top performers and compliment their solid defensive play thus far into the spring. Segment was broadcasted from USC's Cromwell Field.
Sports SCene Link to Story

Sports SCene: Basketball Heads to the Postseason, Spring Ball Kicks Off and More

My debut appearance for USC's "Sports SCene" program. In this installment, I hosted the social media segment. My segment was primarily centered around the commencement of spring practices for the USC Football team. I highlighted tweets from coaches, players, and alumni who voiced their support of the team's preseason activities.
Sports SCene Link to Story

USC to the NFL: The Combine

A piece I wrote recapping the performances of USC Trojans at the NFL Scouting Combine. This article focuses in on the highlights -- and lowlights -- from the Trojan draft prospects. Some of the main points from this piece are Su'a Cravens' impressive field workout, Kevon Seymour's blazing 40-time, and Antwaun Woods' early departure from the Combine.
USC Annenberg Media Link to Story

Following a winless weekend for the USC Trojans Mens Basketball team, I wrote this recap for USCAnnenbergMedia.com. Within the article, I broke down the implications that the USC losses had on the PAC-12 Conference standings; while also analyzing the postseason scenarios the Trojans faced heading into the final week of the regular season.
USC Annenberg Media Link to Story

On the eve of Super Bowl 50, I wrote this piece about Carolina Panthers center and former USC Trojan Ryan Kalil. Kalil, whose Panthers played in the Super Bowl, was an All-American center for the Men of Troy.
USC Annenberg Media Link to Story

Here are some sideline and postgame interviews I conducted following the CIF Championship game between Citrus Hill and Heritage. This broadcast includes my interviews with the winning head coach and players following the title game.
Inland Sports Link to Story

Martinez head and shoulders above the rest

A profile which I wrote on John W. North shortstop Shane Martinez. Martinez, a University of Arizona baseball commit, is a highly-touted prospect for the upcoming MLB Draft this June. This player profile featured quotes from Martinez, coaches, and teammates.
Los Angeles Times -- HS Insider Link to Story

A documentary that a classmate and I created during my junior year of high school. My home region, the Inland Empire, was ravaged by sports concussions at the amateur level of athletics. In an effort to raise awareness for the injuries, my classmate and I went on to produce this documentary, which includes interviews with coaches, athletes, parents, and even a mother who lost her son to a traumatic head injury. This documentary went on to be nominated for a national journalistic award.
The North Star Online Link to Story

My print debut as a correspondent for The Press-Enterprise. The event I covered in this piece was "Bobby Bonds Day", which honored former Major Leaguer Bobby Bonds -- a native of Riverside, California. The article included notes on Bonds' life and quotes from community leaders, family, and friends. Bonds' son, Barry, who is the all-time leader in home runs for Major League Baseball was also in attendance.
The Press-Enterprise Link to Story
View More Stories

Angel Viscarra is currently a reporter for USC Annenberg Media Sports. Viscarra has also made appearances as a host for the USC sports program, "Sports SCene." He is a beat reporter for several USC athletic teams and has also covered both Trojans baseball and basketball.

Viscarra has worked for various news outlets in his career, spanning a diverse set of media platforms.

As a print journalist, Viscarra was the Editor-in-Chief for his high school newspaper, The North Star. Professionally, he has also worked as a correspondent for The Press-Enterprise and the Los Angeles Times' HS Insider section.

Viscarra's body of work has included broadcast and radio journalism. Aside from his current role as a reporter for the Sports SCene program, he has also worked as a sideline reporter and interviewer for several local television affiliates, including Riverside-GTV. He also worked with a Fox Sports Radio affiliate as a personality and producer for the "Inland Sports Show".

From print, to broadcast, to digital journalism, Viscarra has developed a diverse skill set for various media platforms. He looks to complement his journalistic education with an internship or employment in a professional newsroom environment during his college years. 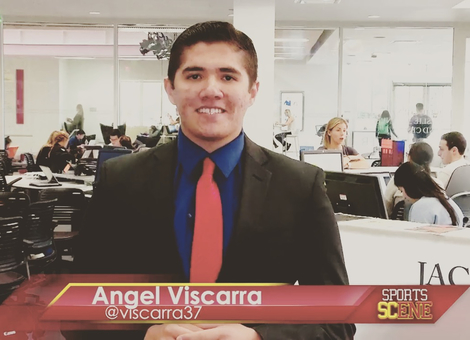